Tallava Passion is a blog focused on Tallava music, a musical genre from the Balkans (Albania,Kosovo,Macedonia,…) generally performed for wedding or party. 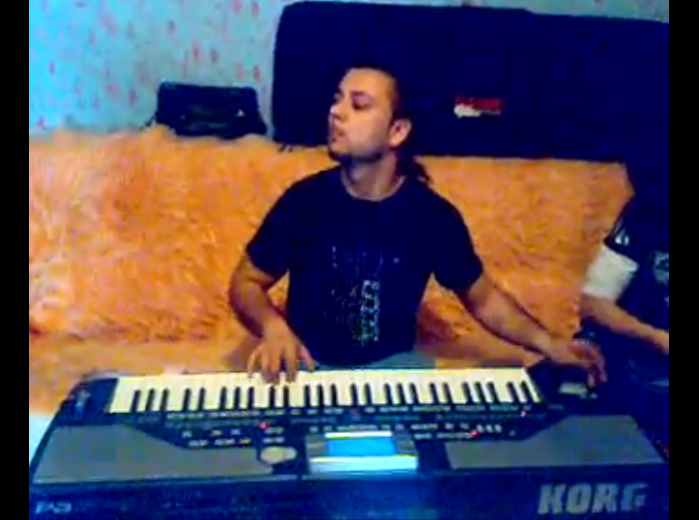 In 2012, I discovered via YouTube a musical practice I had never heard of before: musicians were filming themselves at home frantically playing traditional melodies on their synths. After a few hours of research, I realised the web was full of similar videos, apparently originating from various countries of the Balkan Peninsula.

I quickly shared this with another composer of electronic music, Aymeric de Tapol, as we regularly swap sources of inspirations and other musical favourites. Both fascinated by drone music and the melisma of polyphonies of the Middle Ages, we quickly became infatuated with this virtuoso and languorous synth music. One of its peculiarities consists in being played by the musician’s right hand, while his left hand deals with the pitch bender to render the inflections and tonal scales that characterise some Balkan instruments.  Within a few days, we sent each other many videos based on YouTube suggestions, without really being able to identify this musical object but starting to aesthetically frame it: this music expressed a powerful melancholy, through its throbbing and hypnotic rhythms upon which long melismatic melodies stretch time.  Words and phrases that we did not initially understand often appeared in the videos descriptions or comments (1): “tallava” (or “talava”), “dasmash”, “valle”, “sevcet”, “gio style”, “kalle kalle” … We soon managed to track their geographical origins and drew up an initial inventory:

Tallava is a musical genre played in Albania and Kosovo at festivals and weddings (“dasmash” in Albanian), and dedicated to dance (“valle”). “Kalle kalle” seems to be a recurrent injunction targeting the audience. As for “Sevcet” (also nicknamed “Gio Style”), he is the best known representative of the genre and lives in Germany, like many of these musicians. The limited available resources, our lack of understanding of the Albanian language, and an obvious lack of research methodology prevented us from going any further.

As mere curious musicians, always searching for new inspiration, we found ourselves unprepared in front of an ethnomusicological field: We had purely been seduced by the musical characteristics of Tallava, and perhaps, somehow, by these videos whose significance we did not fully grasp. However, we had barely questioned its social and anthropological reach. We only wanted to share this music, without delving into analytical concerns, as our musical world, through DJ culture, has always encouraged such an approach. So we simply decided to create a blog named Tallava Passion (2) on which we would simply gather these videos. At our level, it already was a form of resistance as we felt we were facing a kind of heritage ethnomusicologists had not been interested in, perhaps because of its cheap and strictly synthetic aspect, far from the great musical traditions of the Balkans.

In 2014, after posting pictures on a fairly regular basis for two years, we felt the need to discover and experience it in real life. We were aware that this remote viewpoint had only given us a partial outlook of the phenomenon and that field research could tell us more. Above all, we wanted to record local musicians to try and produce our own Tallava record with the strong belief that it could trigger in Western audiences and DJs an interest about this particular music.

Thanks to our own networks, we were able to get in touch with Violand Shabani, a Kosovar musician who nevertheless belonged to musical spheres far removed from our own. Indeed, Violand was a member of a fairly popular Albanian metal band and he also worked as scenographer on national television. Even though he did not seem to understand our appeal for this music, he was really keen to help. His first e-mail gave us important information we had not yet come across: “Well about the Tallava music Albanians usually do not play it but Roma community usually do, but we can get in touch with them no problem.”

Our fascination with this musical object had kept us disconnected from the anthropological questions revealed in this first message. However, his next email was reassuring: “a friend or mine we work together from Roma community, he said that he knows four of them, which means that we can get in touch with them fast! «

It was on the plane that arrived in Skopje, our first step before Kosovo, that we encountered the first difficulties. Aymeric spoke with his Albanian next to him who explained that Tallava was a « Roma music” and that it “invaded the whole Albanian culture”.  These kinds of statements would frequently come up through our stay, with part of the population warning us against the dangers our field of study. In any case, once we arrived in Pristina, no signs of Tallava: we met Albanian musicians who told us a little more about the practice of this music, we found some recordings in record shops, we heard turbo-folk variations in the bars of the city centre but it was impossible to glimpse at what we were looking for: this music seemed to be hiding from us.

Indeed, Roma people form a separate community and live mostly outside the city. Even though they became a recognized minority in Kosovo with the advent of socialist Yugoslavia, they were caught in the grip of the 1990s cultural conflicts between Serbs and Albanians.  Many Roma replaced the latter when they massively resigned from public administrations to protest against the persecutions of the Slobodan Milosevic’s regime (3). The Serbs also “used them as gravediggers to bury the victims of abuses or of the conflict itself”(4) which branded them as “collaborators”. Since the end of the war, in 1999, Pristina has turned entirely Albanian (5) and the Roma have had to flee for the suburbs or northern towns with a Serbian majority.

Meeting Sead Ramic, Violand’s Roma colleague at the television (one of the few places where communities still mix) finally enabled us to approach what we had come for. He explained that almost all the musicians he could identify on the videos were living abroad, which was bound to compromise our recording plans.  He however offered to take us to a place where we could hear Tallava live.

We reached a huge restaurant in the mountains north of Pristina. It must have been 10 pm. At the door, three hostesses seated on a stall were sipping energy drinks while chain-smoking. The room was empty except for a few men chatting around a table. A young man was casually playing synth on a small stage: the lack of public seemed to hinder his motivation. He played a rather fast and festive music, close to what we had heard in town, much too loud for this empty space. We were disappointed and told Sead this was not quite what we had been looking for; He explained that it was still early and, after clicking his fingers at the musician and having a few words with him, the latter slowed the rhythm down and put his left hand on the keyboard to produce the characteristic unison, before gradually unfolding the melody with his right hand. The girls at the door rose up and began to perform a slow dance, strolling across the room in a single line. For the first time, we heard the music we had been musing over for almost two years, behind our screens, resonating in its natural environment.

The atmosphere was quite weird, the sustained gazes in our direction discouraged us from using our microphones. Our guides, who didn’t seem very comfortable either, soon wanted to leave. We were annoyed to have to leave so fast, but not knowing where we were we had to follow them.  On the way back, we discovered that the young musician playing that evening was featured on our blog. We just had not recognized him. Indeed, he did not play nearly as well: as Sead explained, playing Tallava is above all a means of earning money and YouTube videos are a showcase for finding gigs, hence the quality of performance there.

Despite our strong insistence, we were unable to meet him again. This was followed by a string of failed encounters with professional musicians only looking for contracts.Eventually, Sead came to our flat with one of his cousins so that we could record some musical material to bring back with us, though this was not enough to make a record.

This narrative shows how our artistic point of view profoundly shaped the Tallava Passion project: from its formative stage, it lead us to fictionalize reality, preferring the aesthetics we defended, far from the axiological neutrality that characterizes the work of researchers. This lack of ethnomusicological method may have in fact enabled us to understand this music in the most natural way, to really listen to it, without replacing it in a historical perspective nor observing it through anthropological filters.

However, the reality on the field propelled us into political and cultural issues: through conversations bearing the sequels of ethnic conflicts between Albanians and Serbs, but also because of the difficulty of meeting the Roma community, forgotten between two populations. It is obvious that our lack of methodology in preparing for the field limited our chances of reaching our goal, and we were undoubtedly naive to think we could collect a coherent musical material in ten days on the spot. For nearly a year, we sought funding to be able to go there. The means to be put in place were beyond our own resources. Unfortunately, the organisations that usually subsidize our creations found little interest in helping a record project that would not bring anything tangible into their territory.

The more we advanced in time, the more our object escaped us: like all synth music, Tallava heavily depends on technology and within a few years, its tones had radically changed, rhythms had been contaminated by banks of western sounds and increasingly conformed to international mainstream music. So, rather than embarking on a search for an imaginary music able to convey our initial emotions, the best testimony might ultimately be this collection of images.

1 The borders between the Albanian Tallava, the Serbian turbo-folk or the Romanian “manele” are not always easy to delimit for a novice ear. To make things simple, let’s say that Tallava uses slow percussion rhythms, few harmonic modulations and melodies inspired by the phrasing of the traditional Albanian gaita bagpipes.

5 According to the 2011 census figures, Albanians represent 97.7% of the population of Pristina (source: http://ask.rks-gov.net )